Lenovo Tenerife defender Sasu Salin is having one of the best seasons of his career.

But most importantly, Salin was one of the key figures in the Tenerife championship in the BCL. However, the Finnish Guard is already thinking about next year.

“In an organization like Tenerife, you automatically think about the next championship,” said Salin Cesare Milanti of Overtime Basket. “They’ve been showing their place in the Final Four or fighting for the BCL title for six years now.”

“You don’t need to talk about it anymore. We loved the moment we won it, but we know we have to do it again. It was great what Burgos did last year, winning it twice in a row.

Tenerife also wants to join the list and win in a row. Speaking of my contract, I am confident here and I really enjoyed my time in Tenerife. It was a really simple place to play and enjoy basketball,” Salin added.

In an interview with Overtime Basket, Salin also talked about his basketball idols, his experience playing with famous NBA players, the upcoming EuroBasket 2022 and other topics.

Let’s talk about your background and your path. When I wrote you about this jersey of Drazen Petrovich, you told me: “The best”. So was Mozart the one who made you fall in love with basketball?
When I was little, it was not so easy to connect. I actually didn’t follow basketball that much when I was very young. My idols were Teemu Rannikko, who used to play in Italy, and Petteri Koponen, who played in the same club where I started playing basketball in Finland.

Sometimes I watched some bright moments on TV, but I could not say that Drazen Petrovich was my idol at that time. But of course I watched his playing style as I got older and watched more of his highlights when the internet was available. Amazing player.

After you started playing in Espoo, you played for Union Olympia for five years. How important was this milestone in your career and how inspiring was it to play with NBA level players like Danny Green, Davis Bertans, Aaron Baines and others?
I think for me it was the best thing that could happen at that moment in my career. Being a 19 year old still very raw player going to a place like Ljubljana where they like to train and develop young players.

I also had information from Teemu Rannikko, who used to play there: he had nothing but good things to say about the city, the team and the organization. At that age it was the best opportunity for me.

Playing with Baines, Bertans, Green and many other great players was very inspiring. Danny came in during the lockout, Bertans didn’t have much of a chance at the Olympia, but then he shone in Partizan and the Basque Country and Baines was a big crazy guy. Seeing great players around you motivates you to work harder and harder.

In Gran Canaria, you played with Pangos and Kuric on the running and shooting team under Aito Garcia: do you think that also helped you become more confident with three-pointers?
Aito’s system was very simple. We had a couple of horns and tambourines to launch the attack, with some options of course, but he wanted us to be very free.

He always said, “What you’re good at, do it on the court.”

I’ve always been a shooter, so I was encouraged to shoot even more. But no one ever told me not to shoot. Kevin Pangos and Kyle Kuric fit into this system very well, and Casimiro also played with Kuric. They are great players. 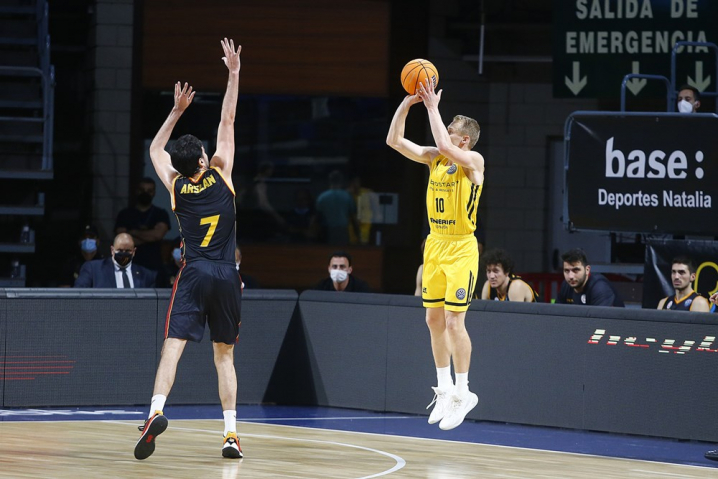 What was it like sharing the court with guys like Teemu Rannikko, Koponen or Mottola, who made basketball history in your country?
I have always dreamed of playing for the national team. Even with Petteri, I played with him for a year in Finland, at Honka, before he left for Virtus Bologna.

I had a small relationship with him even before the national team. Timo and Mottola were big stars back then and I got the opportunity to play with them. Great guys, I had a lot of fun with them and I learned a lot from their experience.

When I was younger, I always said that I would like to play in Italy one day. I would never say no. Actually, when I considered the first place where I would play abroad, the choice had to be made from three teams: Union Olimpia, Skyliners Frankfurt and Virtus Bologna.

But at that time it so happened that I went to Ljubljana: glad about it, I can’t say anything bad about this experience.

But if the opportunity presents itself, why not? Italy is a great country to play in, I have met many Italian teams in the BCL, EuroCup and EuroLeague. Why not.

One year in Slovenia, two in Malaga and now three in Tenerife: you see Shermadini more than you doyour wife? How important is his and Marcelinho’s contribution and experience to the success of the team?
Luckily, I don’t see Shermadini any more than I see my wife, but it’s close! (laughs) He was funny. In my first year outside of Finland I met Gio and now we have been playing together for many years.

He’s a great player, a great guy who makes basketball easier for his teammates. I think what has been built around Gio and Marcelinho here in Tenerife makes it easier for others to play the game and be themselves on the court.

Aniano Cabrera, our CEO, has done a very good job. 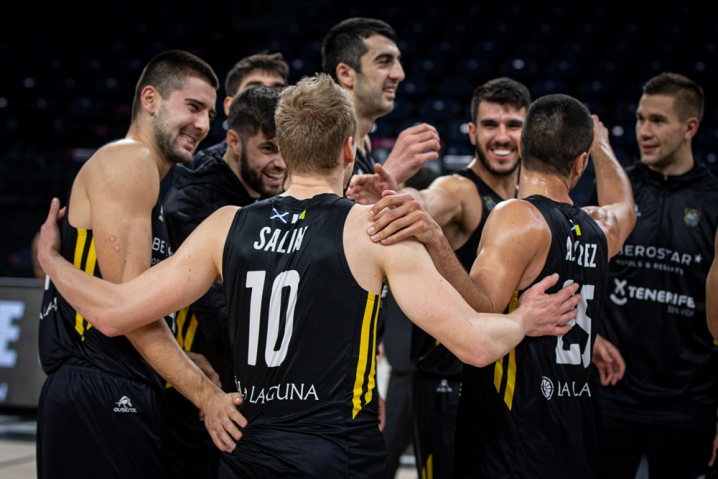 Speaking of Finland and basketball, your country has had a great season. You and Suleimanovic won the BCL, Elias Valtonen was runner-up with Manresa, Tuomas Iisalo was COY with Bonn in Germany and Mikael Jantunen was named 6MOY in Belgium.
It’s great to see the guys doing an amazing job. Players like Valtonen and Jantunen are already showing their potential even though they are in the early stages of their careers.

Speaking of Valtonen, I think it’s amazing that he went from the second division in Germany to the ACB and the BCL Final Four with Manresa. He was ready for it, he’s doing an amazing job.

The fact that Pedro Martinez allows him to play is very important to him. I’m already an old fart, so it’s nice to see young guys. We have a very bright future ahead of us with the national team.

Meanwhile, Iisalo’s victory in the “Coach of the Year” nomination in Germany is a huge and well-deserved merit. Bonn have an amazing style, Tuomas had already done a great job with the Crailsheim Merlins and was close to becoming the head coach of Žalgiris Kaunas.

He has a lot of good things ahead of him, as did Lassi Tuovi in ​​Strasbourg. Very good coaches and players come to us, nothing but good things for the national team.

Are you guys getting ready for the two upcoming matches against Sweden and Croatia?
We start training around the end of June. Once a year, the coaches visit all the guys who play outside of Finland, and we communicate, stay in touch. We have had the same system in the national team for many years, so it is easy to quickly adapt to the style of play.

You will have a tough group at EuroBasket 2022 where you will face Serbia, Czech Republic, Poland, Israel and the Netherlands. What do you expect from this campaign?
It’s a tough group, but we have a really good chance of getting through to the next round. We have shown in previous windows that we can play against great teams. As in Slovenia: they lacked Doncic, and we didn’t have Markannen then.

We have the potential, and if we get things right at the right time, we have a good chance of going even further than ever before. 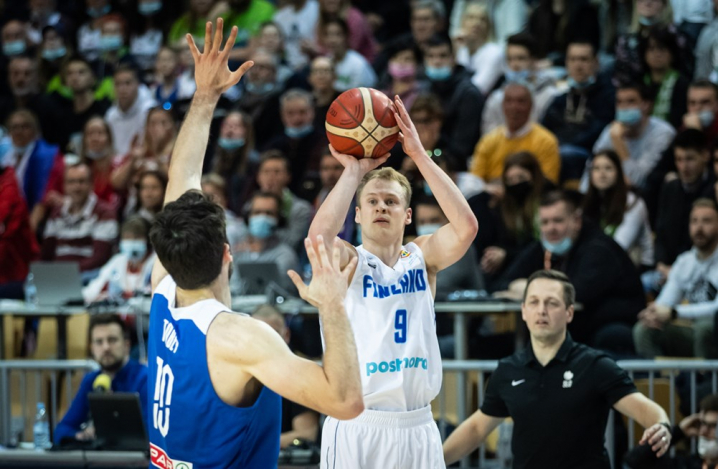 This year you led the BHL in 3-pointers made and you were the 5th best player in 3PT% in this year’s BHL. Do you think you deserve more recognition for your status as a shooter?
I think anyone who plays needs confidence. Of course, as a shooter, you have to be prepared for the shot you are taking: you have to practice a lot.

But there’s so much confidence in it: you’re more likely to make that shot if you’re confident. Confidence is behind practice. And yes, I know I’m a pretty good shooter. This year we played very well as a team and my shooting helped a lot.

In both the BCL and the ACB, I proved that I’m good at it. I don’t mind if people don’t consider me their top shooter or put me on their top shooter list. I let the numbers speak for themselves: I know what I’m capable of and I’m glad if someone mentions or notices it, but it’s a cruel world with so many good players.

Maybe I’m not the brightest guy with amazing spin before the shot: I don’t do crazy things; I just take pictures and usually take them. I’m always ready to score some goals.

In 2021, you extended your contract with Tenerife until 2023, so you will enter your final year with them. Where do you see yourself in the future? Is the 3rd BCL the purpose of the organization?
In an organization like Tenerife, you automatically think about the next championship. They have been showing for six years that they really belong to the Final Four or fight for the BCL title.

You don’t need to talk about it anymore. We loved the moment we won it, but we know we have to do it again. What Burgos did last year was great, winning it twice in a row.

Tenerife also wants to join the list and win in a row. Speaking of my contract, I am confident here and I really enjoyed my time in Tenerife. It was a really easy place to play and enjoy basketball.