Israel will open its airspace to international flights en route to and from Qatar during this year’s FIFA World Cup after an agreement was reached on Wednesday with Jordanian and European aviation authorities that is expected to cut flight times.

The event, announced by the Israel Airports Authority, comes a week after the Israeli government entered into an agreement with the world football organization FIFA allowing Israeli football fans to travel to Qatar for the World Cup in November and December, despite the two countries not have official diplomatic relations.

European and American fans traveling to Qatar will be able to fly over Israel, traveling east from Cyprus to Jordan en route to the Persian Gulf and also on the way back, according to an announcement made on Wednesday.

A source familiar with the matter told The Times of Israel that the agreement will continue even after the World Cup on eastbound flights to Qatar.

The IAA said the deal would see many more flights over Israel in addition to flights to and from Qatar, more than doubling the number of overflights.

“Israel is demonstrating sportsmanship and opening up its air borders for the benefit of passengers,” Transportation Minister Merav Michaeli said. “I welcome the cooperation and am happy to strengthen additional regional cooperation.” 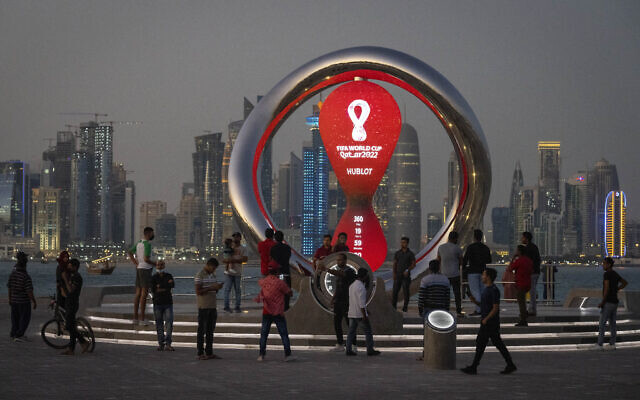 People gather around the official countdown clock showing the time remaining until the start of the 2022 FIFA World Cup in Doha, Qatar on November 25, 2021. (AP/Darko Bandic)

Last week, the ministers of foreign affairs, defense, culture and sports announced in a joint statement that Israeli citizens, who can normally only enter Qatar with a foreign passport, will be able to travel freely and attend games during the upcoming tournament.

Under the terms of an agreement with FIFA, the sport’s international governing body, Israelis wishing to attend the game must purchase a match ticket and then apply online for a Fan ID, the approval of which entitles the holder to entry into Qatar and allows them to book accommodation.

The statement did not address concerns about the safety of travel to Qatar, a country with strong ties both to the West and to Iran and the terrorist group Hamas.

The pressure on sports tournaments has helped open up new diplomatic horizons for Israel in the Persian Gulf. In 2018, two years before a ties agreement with Israel, Abu Dhabi allowed the Israeli flag to be displayed and the anthem to be played during sporting events, ending a longstanding policy the United Arab Emirates shared with most other Gulf states.

Qatar hosted an Israeli trade office from 1995 to 2000, but is unlikely to join other Gulf states in establishing full ties with Israel due to its relationship with Iran.

Amy Spiro contributed to this report.

Support for The Times of Israel is not a deal for an online service like a Netflix subscription. The ToI community is for people like you who care common good: Ensuring that balanced and responsible coverage of Israel continues to be available to millions of people around the world for free.

Of course, we will remove all ads from your page and you will have access to great community-only content. But your support gives you something more: the pride that you have joined something that really matters.

Join the Times of Israel community

You are a devoted reader

We are glad that you read X Times of Israel Articles last month.

That’s why we launched the Times of Israel ten years ago to provide astute readers like you with must-read articles about Israel and the Jewish world.

So now we have a request. Unlike other news outlets, we have not set up a paywall. But because the journalism we do comes at a cost, we invite readers for whom The Times of Israel has become important to support our work by joining us. Israeli Community Times.

For just $6 a month, you can support our quality journalism while enjoying The Times of Israel. AD FREEas well as access exclusive content available only to members of the Times of Israel community.

Thanks,
David Horowitz, editor-in-chief of The Times of Israel